Why do we add pulses together?

An individual pulse from a pulsar can be weak and may not rise far enough above the noise. But if the data are folded at a pulsar’s period, the noise starts to cancel itself out (forming a flat baseline), while the pulses add constructively and pop out more noticeably.

These added pulses are called the “average pulse profile.” While individual pulses may vary in shape, their average shape is very stable.

Why is the pulse profile plotted twice? 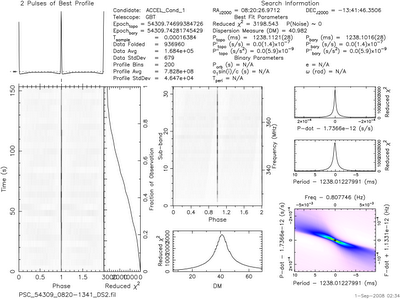 If the pulse profile were only plotted one time, plots such as the one shown here would be a problem. The pulsar would only show up at the edge of the average pulse profile subplot, and it might not be recognized as a pulsar. So PRESTO plots the same exact pulse profile two times, so that no matter where the pulse came in time-wise, it will be seen in full.

The other subplots also have information plotted twice. The subplot below the pulse profile is called the time domain plot.

Why are there more than two pulses in the pulse profile?

Sometimes, the software guesses a period that is close, but not quite right. If it guesses a period that is twice the pulsar’s actual period, the average signal will still pop above the noise, but there will be two pulses in the pulse profile, and then those two pulses will be plotted twice (so that four pulses would appear in the average pulse profile subplot). If the guessed period is three times the actual period, there will be six pulses in the profile.

The data that you analyze using the database was taken at 350 MHz. This “beam” is really big. What this means is that when the telescope points at the sky, it can see one spot and it is about the size of the moon. Another way to think of this is using a digital camera as an example. Most digital cameras now are many megapixels; a 4 mexapixel camera has 4 million little pixels on the CCD chip inside.

When you take a picture, each pixel captures a little bit of different light and when you put all the pixels together, you get an image. And you can’t see anything smaller than a pixel; the resolution of your image is dependent on the size and number of pixels. The GBT is somewhat similar, but for pulsar observing, it only has one pixel. The size of the pixel is determined by the radio frequency: the lower the frequency, the larger the pixel. So, at 350 MHz, the pixel is really big (about the size of the full moon).

The RA and Dec can vary a bit too, so don’t be surprised if that differs from what is on your plot. It is a common misconception that it is because the pulsar moved. The reason it varies is this: The way the telescope works is that it can observe frequencies from about 100 MHz to 100 GHz, but it can’t see all those frequencies at once. We break that frequency range up into smaller segments (like 100-300 MHz, 300-400 MHz, and so on) because each frequency range needs its own receiver on the telescope (You can think of the receiver as a radio wave detector). The reason each segment needs its own receiver is because the wavelength varies quite a lot between 100 MHz and 100 GHz, and so you can think of each segment needing its own size wavelength detector. We don’t use the same receiver to detect both meter size waves and centimeter size waves…. that’d be like trying to use an x-ray detector to detect gamma rays!

For pulsars, we use the 350 MHz receiver for two reasons. One: pulsars are much brighter at lower frequencies. Two: Since we are searching for pulsars, we want to cover as much sky as we can in the least amount of time, so we want a big pixel. The thing about this, though, is that when we find a pulsar in our beam, it can be anywhere in the size of the full moon from where our telescope is pointing. So we can point the telescope at one RA and Dec, and if a pulsar is close by (with in the size of the moon), it will show up in our data. That’s why the RA and Dec can vary between what is on the plot and what is in the ATNF catalog.

When we find a pulsar at 350 MHz, since we don’t know its exactly location (it can be anywhere in that full moon range), we try to observe it at a slightly higher frequency. Since the beam gets smaller, we scan the area that was covered by the 350 MHz beam, looking for it. When we find it, we’ve narrowed it down to a smaller region. Then we use the next higher receiver and do the same thing until we get its exact location.

What is a reasonable dispersion measure?

The maximum dispersion measure ranges depending on where the candidate is in the sky. The galaxy is shaped like a disk, and we are about 2/3 from the center of the disk. The DM depends on how much “stuff” is between us and the pulsar. So, if the pulsar is in the plane of the disk, we have to look through a lot of stuff to see it, so the DM can be really high. If the pulsar is outside the plane of the galaxy (like above the disk), then we don’t look through a lot of stuff to see the pulsar, so the maximum DM is much lower. So, what is a maximum dispersion measure depends on where you are looking. To determine what the maximum DM is for your plot, go to the front page of the PSC website and scroll down to where it says “Check the Distance to your Candidate.” Enter the RA, Dec, and DM of your plot. The last sentence will tell you what is a reasonable dispersion measure for any given RA and Dec (it differs for every RA and Dec, so you have to do it for each pointing).

What is reduced chi-squared?

Why do pulsars slow down over time?

The short answer is: Pulsars slow down because they give off energy and the energy loss causes a loss in rotational energy.

So, for example, with the Crab pulsar…the pulsar radiates away a certain amount of energy over a given period of time because of its magnetic field. That energy is radiated into space, and since the Crab is surrounded by a nebula, the energy heats up the nebula and makes it glow. This match between the predicted energy loss of the Crab pulsar and the amount of energy needed to power the nebula was verification that (at least parts) of the theory of pulsars was correct.

Obviously, not all pulsars are in a nebula. In this case, the energy that the pulsar radiates away just goes out into space. (And, sometimes, eventually reaches Earth.)

Do pulsars pulse all the time?

Not always. Pulsars spin very regularly, and their pulses alway comes at the same point in that spin (when a magnetic pole is pointed at Earth). However, pulsars do not always emit radio waves, and do not always have pulses that have the same brightness.

Some pulses may be weaker than others, and some may be stronger, and sometimes, when a pole is pointed at Earth, there may not be radio waves coming from it, so the telescope would not see a pulse. If a pulsar is not emitting radio waves, that is called “nulling.”

Because of nulling and the variations in pulse strength, we need single-pulse plots in addition to prepfold plots. Prepfold plots search for signals that repeat regularly, but what if a pulsar were nulling for 149 of the 150 seconds of observations? What if some pulses are too weak to be detected, so the telescope only catches a few? The pulsar might not pop up in a prepfold search.

In a time domain subplot on the prepfold plot, a nulling pulsar would have gaps in its vertical linearity.

Do pulsars emit other types of light?

Yes! Pulsars can also emit optical light, X rays, and gamma rays, all of which are higher-energy waves.

Can we make pictures of pulsars?

Imagine trying to make a map of Washington, DC…from several thousand light-years away! That’s how hard it would be to make an image of a pulsar. Pulsars are “point sources,” which means that they are smaller than the field-of-view of the GBT (and of every telescope in existence). So while we can see them, since they are smaller than a telescope’s “pixel” (a.k.a. beam, a.k.a. field-of-view), we cannot make a multi-pixel image of them, which is what is required to make a “picture” in the traditional sense.

What does the P-Pdot diagram tell me?

If you know how fast a pulsar is currently spinning (its period) and also how much it is slowing down (its p-dot, or the derivative of its period, which is the change in its period over time), you can find out how that pulsar’s spin properties compare to the spin properties of other pulsars. When pulsars’ periods and period derivatives are plotted against each other, the pulsars tend to fall into several groups. There is a large group of “normal” pulsars, which are losing energy relatively quickly and spin relatively slowly. There is also a large group of pulsars that are spinning very rapidly and losing energy very slowly–these are the millisecond pulsars formed in binary systems.

Comments on this entry

There are no comments on this entry.